'People in their 20s who want to rent a place for themselves face having to pay out an "unaffordable" amount in two-thirds of Britain, BBC research shows.

They face financial strain as average rents for a one-bedroom home eat up more than 30% of their typical salary in 65% of British postcode areas.

Many housing organisations regard spending more than a third of income on rent as unaffordable.

Flat-sharing - the choice of many young employees - does not entirely resolve the issue as 12% of postcode areas in Britain remain "unaffordable" for two people in their 20s sharing a two-bedroom home.

Analysis by the BBC's data team shows that a gross annual income of £24,800 would be needed for the average one-bedroom rental flat in England to become affordable under the 30% measure. In Scotland £20,700 is needed and in Wales £17,600.

Many people can pay more than 30% of income on rent, but housing organisations say this puts considerable strain on the rest of their finances.

'We have to live with our parents'

Friends Molly Ebdon, 22, Danielle Campbell, 25, and Amelia Scott, 24, all work in Cheltenham but find it prohibitively expensive to rent in the town.

"It is expensive on a starting salary and any kind of saving is not an option," Danielle said.

Amelia, who previously rented but was now back living in the family home, said that moving into a rented home in Cheltenham would mean giving up a car and cutting back on other spending.

But staying with parents also brought restrictions on where to look for jobs. Shop manager Morgan Twyning said she and her partner moved in with his parents in order to save, as rent would have taken up most of their salary.

The 25-year-old said that Sunday roasts were nice but the living arrangements were "not what I had envisioned".

"My friends definitely struggle. A lot of their money is used up in just their rent alone," she said. Dan Wilson Craw, director of lobby group Generation Rent, said: "This research is more evidence of how difficult it is to lead the life you expect. If you get a job and work hard, you should expect to have some choice about living arrangements.

"People in areas with a strong jobs market have to find somewhere to share with others in order to afford to live there."

The data reveals the importance of location in determining how big a chunk of their monthly salary is likely to be spent on rent.

Kate Faulkner, housing analyst and managing director of Propertychecklists.co.uk, said that renting can be affordable in many areas outside of London, but the particular squeeze in the capital dominated the debate and meant many other pressing concerns for these tenants were overlooked by policymakers.

In London, a 20-something with a typical average income would spend 55% of their monthly earnings on a mid-range one-bedroom flat. Housing charity Shelter considers any more than 50% as "extremely unaffordable".

That rises to 156%, so one-and-a-half times a typical salary, in one part of Westminster - the most expensive part of London - where an average one-bedroom home costs £3,500 a month to rent.

In contrast, a tenant aged 22-29 looking for a typical property of this kind in the Scottish district of Argyll and Bute would only have to spend 15% of their income.

Finding one or more flatmates is a popular way of cutting the cost for many young tenants. The figures show that two people aged in their 20s sharing a two-bedroom flat in Manchester could pay just over 20% of their income on rent.

Separate research from Shelter suggests that tenants may already find that they are cramped for space compared with those who own their homes. The charity estimated that private tenants in England are spending £140 more in housing costs than people with a mortgage. In the last 10 years, when families have been increasingly likely to rent, owners have seen the average floor space of their homes increase by 7% compared with a 2% rise for tenants.

That leaves owners with an average of 30 sq m extra floor space than tenants, which the charity suggests is the equivalent of a master bedroom and a kitchen. 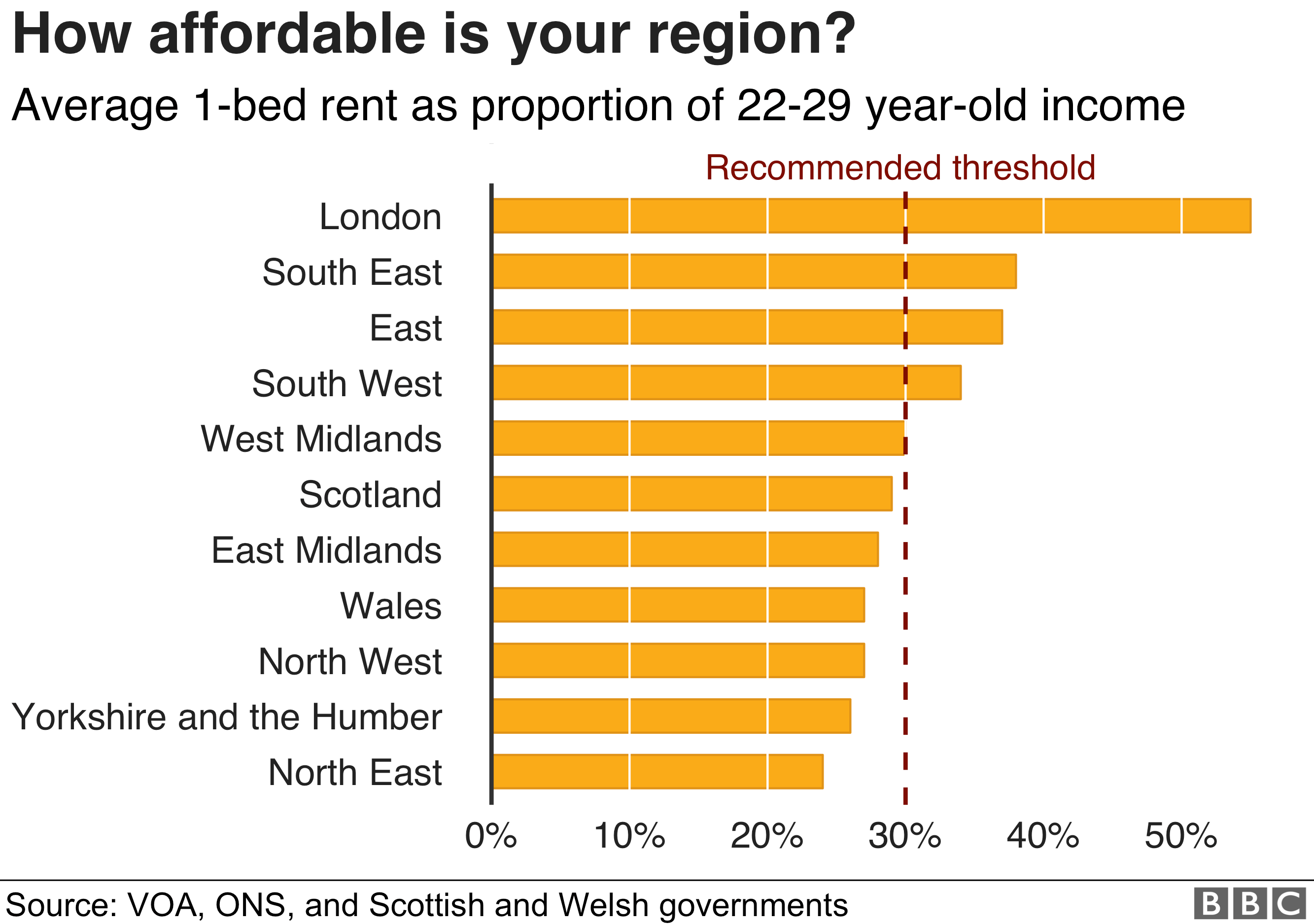 This all comes at a time when young adults might look back in anger at previous generations. The BBC research shows that a private tenant in the UK typically spends more than 30% of their income on rent.

In 1980, UK private renters spent an average of 10% of their income on rent, or 14% in London. However, there were many more people renting from councils or in social housing at that time. 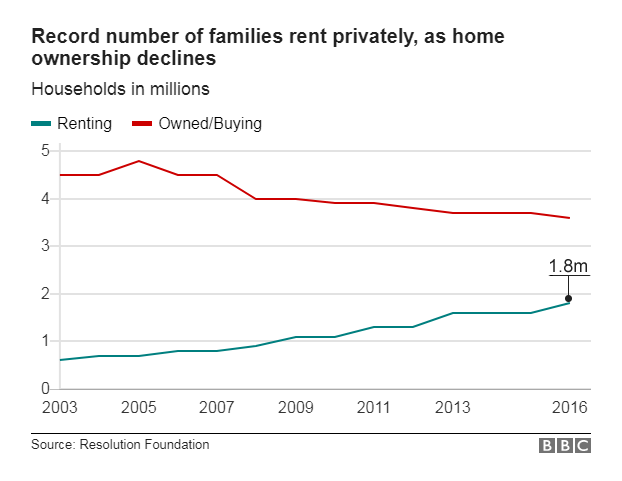 Landlords say they face costs, including their mortgages, insurance, maintenance and licensing, that need to be covered from rents.

"These costs are increasing as the government introduces new measures to discourage investment in property, such as the removal of mortgage interest relief and the changes to stamp duty," said Chris Norris, director of policy at the National Landlords Association.

"This is compounded by the number of landlords divesting as their businesses become less financially viable, resulting in fewer properties available to rent, while demand for properties across the UK remains high." Methodology: What counts as "unaffordable"?

There is no official UK measure of what constitutes an "unaffordable" rent, but based on recommendations from housing organisations the analysis uses a threshold of no more than 30% of income.

The National Housing Federation recommends 30% of gross median income as the measure generally used by people in the housing sector and academics. Shelter defines anything over 33% as "unaffordable" and additionally anything over 50% as "extremely unaffordable".

Why the focus on 20-somethings?

Because it's the age group that is by far most likely to be renting.

Renting has more than doubled over the last 20 years, and 65% of 16-24 year olds and 42% of 25-34 year olds now rent privately, according to House of Commons Library research.

Where does the data come from?

The salary figures by age group come from the ONS's Annual Survey of Hours and Earnings survey and are regionally adjusted figures.

Rent figures show the median rent broken down by property size and postcode district for Great Britain, and were produced for the BBC by Hometrack, based on a snapshot value from March 2018. There was insufficient data on Northern Ireland.

The regional averages come from the Valuation Office Agency, StatsWales and the Scottish Government and cover 2017 for Scotland and Wales and April 2017-March 2018 for England.'